The Isles of Ponant

Fragrances of the ends of the earth 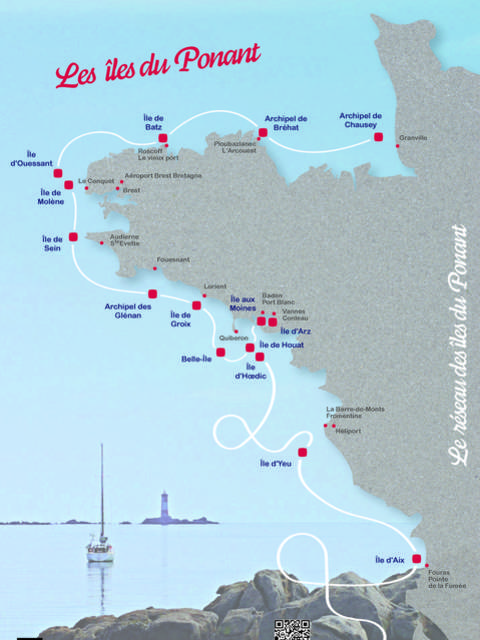 Of the hundreds of islands that dot the western coast of France, only fifteen are permanently inhabited: these are known as the isles of the Ponant.

Dream destinations though they are, the islands are also living communities. The men and women who live there have a relationship with the elements. Islanders appreciate simple things that speak to us - self sufficiency, discovery and friendliness first among them. To get to know them best, you really have to come out of the tourist season.

From the archipelago of Chausey to the island of Aix via Ouessant, Groix and Belle-Ile-en-Mer, the fifteen islands of the Ponant are true islands, no bridges, and a real change of scenery guaranteed.

Privileged places, fragile lands, sometimes hardy, sometimes hospitable, austere or laughing, nearby yet distant when the sea rages, they are mysterious and homely - islands with many facets, but above all they are lands of welcome, encounters and sharing. Each of their names is a promise of escape.

A short sea crossing and you are truly "elsewhere!"

an island, everything starts from there

The islands of the Ponant group are to be found in either the Channel or the Atlantic. All inhabited permanently, they have constituted an association to maintain an active island community.

When it was created, AIP had a grand ambition - to guarantee a future for the Atlantic and Channel Islands. Its primary purpose is "the maintenance of territories propitious to active and attractive island communities".

The AIP plays a role in many different areas - public finances, public services, regional planning, agriculture, tourism, the environment, town planning, culture, etc. It is recognised as the first line of consultation for the public authorities on island issues.

Since April 1971, the association has brought together the elected and socio-professional leaders of the islands - Mayors, Departmental Councillors, Deputies (members of parliament), Senators, representatives of the Consular Chambers, Fisheries Committees, Tourist Offices, Transport Companies and local authorities.

A MYRIAD OF ISLANDS, FROM THE CHANNEL TO THE ATLANTIC

From Chausey via Bréhat, the island of flowers, to Batz with its open fields in the middle of the sea, the isle of Ouessant with its ancient secrets, Molène with its human scale, the Ile de Sein, the "absolute island," the Glénan archipelago, paradise-on-sea, the island of Groix, bienvenue chez les greks! Belle île en mer- the beautiful island, as the name suggests... from the island of Houat, living from the sea to Hoëdic, the cutest little island, the  ile d’Arz with its history and the ile aux Moines, forever as the crow flies... the ile d’Yeu which you now know so well and the ile d’Aix, with her hand on her heart. This is the Ponant community.

Each island has its own unique character - what a grand project to discover them all!